Some content is borrowed from the Wikipedia. This will be indicated in borrowed sections.

Concrete Genie (Ash to Mahou no Fude) is an upcoming beautifully designed, part puzzle, part platformer game developed by Pixel Opus, an in-house studio of Sony Interactive Entertainment that also brought us Entwined. Concrete Genie was announced at PGW 2017 and will release on October 8, 2019, on the PS4 exclusively. The game may require PlayStation VR and Move compatibility.

Concrete Genie is the story of a young boy named Ash. He loves to draw and will often sit and doodle in his notebook. One day Ash is confronted by a group of local bullies who grab his book and tear the pages from it. The pages are scattered around the city and Ash begins a quest to find them. On the way, he discovered a magical paintbrush with the ability to bring paintings to life. Equipped with this amazing item, Ash begins to paint the walls of the run down and nearly vacant city.

All the beautiful artwork is not appreciated by the bullies who still find enjoyment in tormenting Ash at every turn. Ash turns to his new creature friends for comfort but must still find ways to avoid the bullies. He can do so using an expansive set of parkour moves.

During gameplay, players will aquire up to 50 (roughly) brushes spread across five colors. The different shades have elemental properties which can be used to affect the environment. Players will need to combine colors to solve puzzles and progress into new territories.

The player controls Ash and uses the DualShock 4's motion controls to create landscapes in the town of Denska. These landscapes turn into living portraits. How you paint creatures and what color you paint them will affect their personalities. For example, red paint will grant a creature fire-breathing abilities. In addition to free-style drawing, there is a set of core puzzles in the game that the player will have to solve through their artwork.

Project manager Brent Gocke says the game will be between five and six hours long. The developer is currently looking into a multi-player component to the game.

Pixel Opus served as the game's lead developer. Creative director Dominic Robillard says the game is heavily inspired by Sega's Jet Set Radio, while the concept of painting street arts came from one of the team members, Ashwin Kumar, who grew up in India. The game would not rate any players' creations because the team did not want to judge players' creation. The game features a story mode that will deal with themes like bullying. The game was later delayed to late 2019, though PixelOpus confirmed that the game will be released with a mode for the PlayStation VR headset.

Add a photo to this gallery 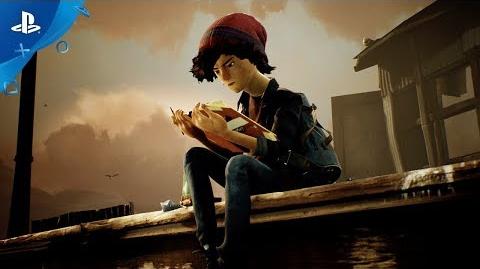 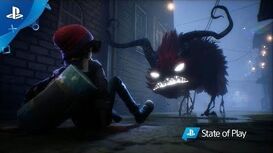 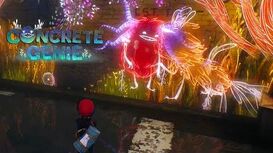 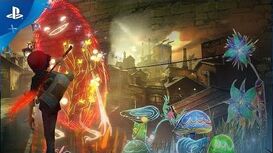 Retrieved from "https://concretegenie.fandom.com/wiki/Concrete_Genie?oldid=123"
Community content is available under CC-BY-SA unless otherwise noted.